Comedian Dave Chappelle once stated, “The worst thing to call somebody is crazy. Its dismissive, I don’t understand this person so he’s crazy. That’s bull***, these people are not crazy, they’re strong people but maybe their environment is a little sick.” Crazy. The buzzword that raises eyebrows and makes people cringe. Being associated with “crazy” or “mental illness” is like wearing the Scarlett Letter, and in minority communities this idea is even more prevalent. For most minorities, mental health is treated as a taboo subject; the giant elephant in the room t 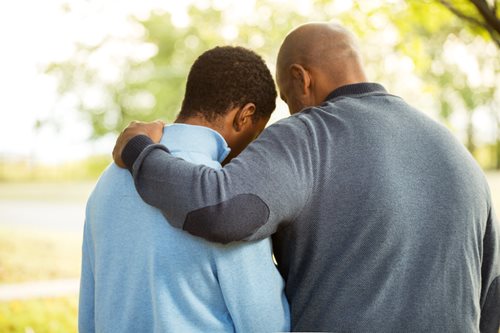 hat is almost never talked about. In most of these neighborhoods, depression was seen as a “white issue” and being bipolar meant that you were just crazy. Having suicidal thoughts meant that you were weak-minded. Growing up, I was taught that the sole treatment for most mental issues was going to church and relying solely on prayer. The stigma of mental health was like that faded stain in your favorite shirt; no matter how much you try to scrub it and clean it, it still shows up. 1 in 5 Americans will experience a mental health issue, yet most will not seek treatment. According to the National Alliance of Mental Illness (NAMI), the leading mental health advocacy organization in the country, African Americans and Hispanic Americans only seek treatment at half the rate of their White counterparts. However due to the recent alarming increase of mass shootings and celebrities making controversial, shocking statements, mental health is now in the consciousness of most Americans, and more specifically the black community. The key is treating mental health just as one treats diabetes, hypertension or any other chronic condition. Mental wellness is a large, complicated issue and it may require treatment from mental health professionals (i.e. therapists, psychiatrists) who can help diagnose symptoms and develop successful treatment plans similar to a person with heart issues going to visit a cardiologist or having a cavity and going to visit the dentist. Normalizing the idea of mental health treatment through education not only helps the affected person, it teaches society how to treat them as well. Social acceptance, general encouragement and support from friends and family may help keep people on the right track as well. Making mental health normal is not only necessary, it’s the first step in erasing the myth that you have to be a certain skin color or belong in a selective tax bracket to be affected. In addition, most people who are struggling with mental illness feel alone. They feel isolated and disconnected from society. It is a huge burden for a person to carry and can only lead them further down the rabbit hole. These individuals should be encouraged to share their experiences with others who are going through the same illnesses. During my senior year in high school, my 3-year-old nephew was shot and killed in an accident and as a result, I struggled with depression for several months. Blaming myself for his loss. I hardly slept and could barely eat. It felt like I was sleepwalking through life, trapped in a constant fog of sadness, helplessness and anger. Why did it happen? Why didn’t I do more? I had questions that I felt no one could answer. It was only after talking with others who experienced the pain and heartache of loss, as well as going to therapy with an open heart and mind, that I was able to recover and release. Confronting my emotions and doubts instead of burying them. I had to reteach my brain that accepting help is ok and that we are all vulnerable sometimes, and that sometimes your greatest strength comes from being weak. I had to unlearn lessons which my community taught me; That as a black man, you keep everything inside and show no emotions. Our community must learn that talking about mental health is not a “white thing”, or a “rich people” or a “woman” thing, it needs to be for everyone, regardless of where you come from or the color of your skin; and this is the first step that we can take to not only break the stigma, but permanently delete the stereotype.