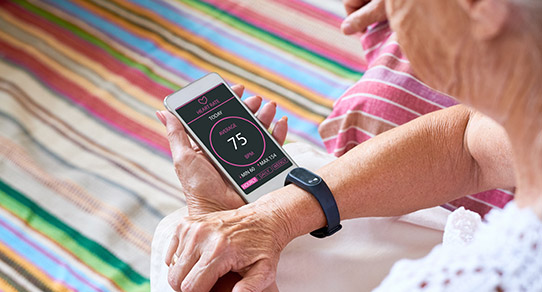 Technology has become a great connector in society. In many respects, grade-school children have become more adept in using smartphones and iPads than their parents. Young teenagers solely accustomed to social media have never experienced a world without Snapchat filters and IG story posts.

People now more than ever are dependent on technology.

You might be surprised to learn that this shift has also begun to occur within the senior community. Compared to other age groups, seniors may still use technology at a lower rate, but they are more engaged with the digital community at a much higher pace than before.

As of now, almost 4 in 10 seniors own a smartphone, and internet usage is also rising.  Seniors between the age of 65-70 are the most likely to be using technology as well. 34% of Americans ages 65+ use social networking platforms such as Facebook or Twitter.

So, what does this mean?

Technology affects people of all ages.

As its impact on society increases throughout the years, so does the likelihood that older people will not only be tech-savvy, they will rely on it just as much as their younger counterparts. The world continuously changes and coincidently so does technology. It is absolutely essential that all people, no matter the age group recognize this and grow with it.

At one point in history, driving a car was seen as innovative. Typing on a typewriter attached to a large screen was unheard of. Now, these are daily tasks that many of us cannot live without, including our seniors.

It is the daily newspaper of the 21st century and much more. Most news outlets report faster on their social media sites, then on the television. Therefore, in addition to increased smartphone usage, seniors have begun to look at social media and the internet as a way to keep up with the everchanging landscape of society. Seniors have begun to engage with gaining information from digital outlets versus traditional forms such as television and newspapers.

Some barriers remain between seniors and technology.

Older seniors over the age of 75 are less comfortable with technology and are unfamiliar with how to properly use electronic devices. A poll from the Pew Research Center discovered that only 26% of internet users over 65 feel confident when using computers, smartphones, or tablets, and 28% of seniors say they have health problems or disabilities which may prevent them from engaging in activities.

These seniors are less likely to engage with digital devices as well. Despite the challenges, the overwhelming trend is that increasing access to technology can be seen as a positive step in assuring that the senior community remains informed and knowledgeable about the world and current events.

As time goes on and technology remains a fundamental part of society, its impact will only continue to increase with the older generations and continue to be a key tool to keep seniors active and engaged.